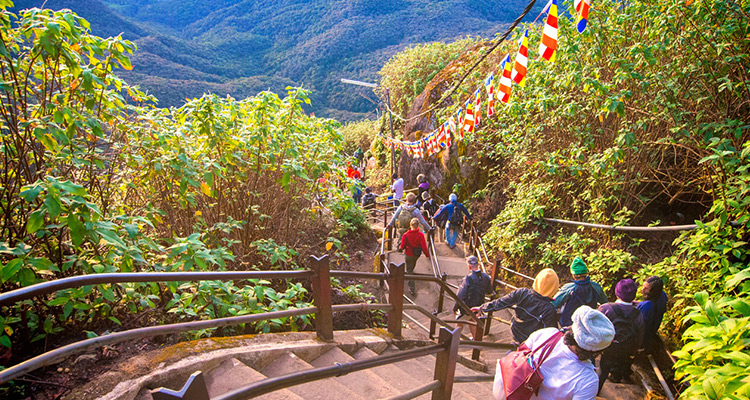 Adam’s Peak is one of the most challenging and rewarding hikes in Sri Lanka and thousands of tourists join pilgrims on the night-time climb every year. Pilgrims journey to Adam’s Peak to see the footprint at the summit, variously believed to be the footprint of Lord Buddha, Lord Shiva, Adam or the Christian apostle St. Thomas, and holidaymaker are only too keen to join them in the hope of witnessing one of the most glorious sunrises in Asia from the top of the mountain.

We set out at 1am, a little earlier than necessary in order to avoid the crowds, bundled up in warm layers I never thought that I would need in Sri Lanka. The sky was completely clear, dotted with glistening stars, and our path was well-lit by a radiant moon – we were going to have a perfect dawn when we reached the top. Our mood was buoyant.

Our guide, who does this climb regularly throughout the season and has calves like rocks, led the way towards the foot of the mountain which was illuminated by the light of makeshift shops selling hats, gloves, water and snacks. We stocked up and pressed on, eager to begin the climb.

The hike starts with a gently sloping path that winds through terraced tea estates along the side of the mountain. Despite us making the climb in January, the most popular month, there were few others on the path and the stillness of the night was only broken by the sound of local bayla music issuing from the roadside stalls.

After around half an hour, we arrived at the start of the staircase which has been cut into the rock over many years. The steps were wide and shallow with handrails on each side, and as we began to climb, we caught up with locals and pilgrims who had started ahead of us.

Our guide told us that some of these people had already walked for days from other regions of the island, but all looked joyful rather than exhausted. We passed one elderly lady who was crippled, her toes curled beneath her feet, hauling herself up the steps using the railing. Her face was ecstatic, and she was singing as she climbed.

The hike takes approximately three hours. Towards the end, the staircase gets narrower, steeper and more uneven, and we had to make regular stops to catch our breath – but we kept pressing on, anxious to reach the top in time for dawn.

The last few minutes can be done via two paths, both of which curve steeply up to the top. People were starting to queue up the newest trail, so we hurried along the old path hoping to get ahead, and managed to heave our tired limbs up the last few steps to the top.

It was packed with people, all jostling to reach the shrine which covers the footprint or the edge of the mountain for the best views. We managed to get a great spot at the front of the crowd and then stood, silently, waiting for sunrise.

As light began to spread across the landscape, the hills and mountains surrounding us emerged through the darkness, half-shrouded in a thin, pale mist. We saw lakes, tea estates and patches of forest, connected by tiny, wandering roads.

A monk began to chant, played through speakers so all could hear, and then the sun appeared straight across from us, peaking over the edge of the mountains beyond. The sky erupted in a riot of colour, first pink and purple and then burning orange before settling on a glorious, uninterrupted blue.

I have lived in Sri Lanka for three years and have been lucky enough to see some of the island’s most beautiful sights, but nothing has ever beaten the awe-inspiring sunrise I witnessed from the top of Adam’s Peak. It was a moment of pure bliss that I will stay with me forever.