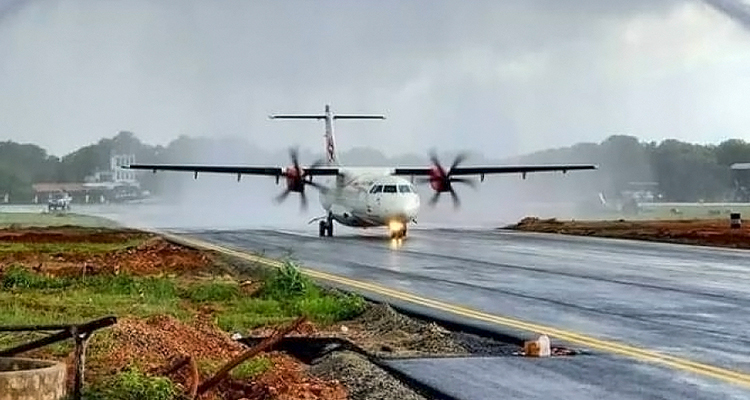 Sri Lanka opened its third international airport yesterday, paving the way for travellers to fly into the Northern Peninsula of the island.

An ATR 72-600 aircraft carrying the Air India Chairman and Alliance Air CEO amongst other staff and journalists, was welcomed at the Jaffna International Airport (JIA) with a water salute and great enthusiasm for the possibilities ahead.

The JIA was previously known as Palaly Airport and was primarily used as a military airbase and for domestic flights. Further construction is due to take place over two more phases with the next three months focusing on extending the current runway.… The project which is estimated at USD 6 million will consist of a 1700-metre long tarmac strip and a single terminal that will facilitate travel to eight other domestic airports that are being planned across the island.…

Lazy days in Yala National Park, home to the islan

As if sunrise from the summit of Adam's Peak wasn'

Beautiful capture of a highland train passing over

Situated high on a hilltop overlooking Kandy, the

The lush green tea fields of Ella come with a back

A protective mother shields her calf in Udawalawe

Young monks preparing to take a cooling dip in the

Five out of the world's seven marine turtle specie

Sunset over the Indian Ocean as seen from the Sri

There are some scenes you only come across in Sri

Follow the link in our bio to read an insider guid

At Red Dot Tours we are passionate about Sri Lanka

Not far from yesterday's beautiful beach scene, An

The ancient city of Anuradhapura was founded in th

Colombo's Jami Ul-Alfar Mosque, or Red Mosque as i

The solid rock ceiling of Dambulla Cave Temple is

Outside Dambulla's Rock Temple where thousands of