Colombo City Walks – Discovering the City Behind the City

When I first heard about the Colombo City Walks, the first thought that came to my mind was: “Is a visit to Pettah markets really that appealing?” Nevertheless, wherever I went, word on the Walks frequently popped up. So when I was invited to join my team of Red Dotters for some much-needed exercise, I was the first to say yes. 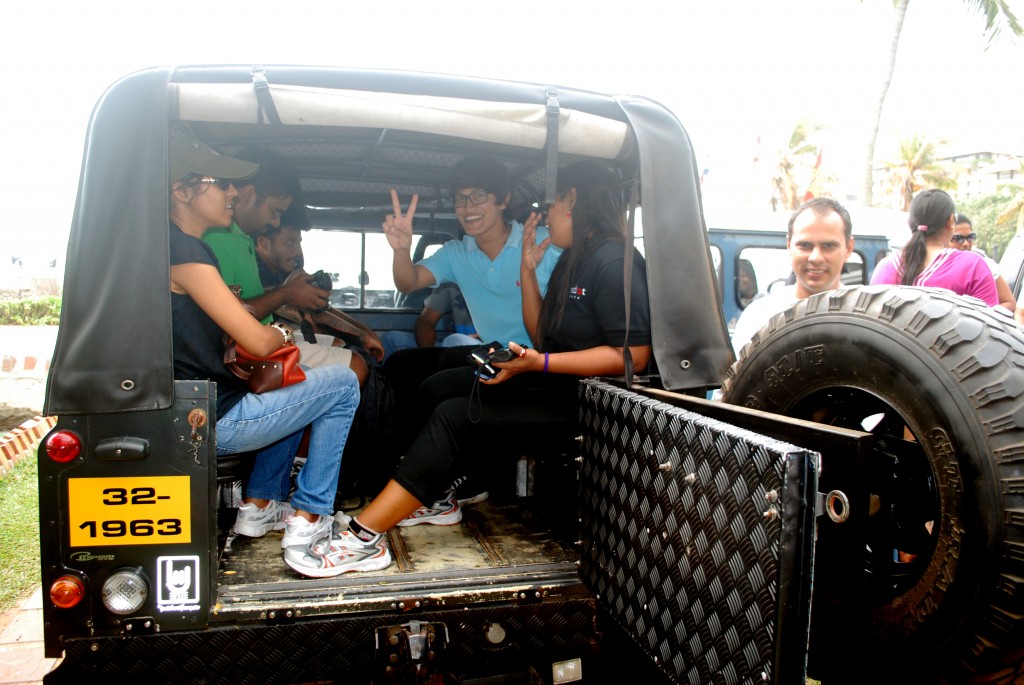 We met Mark and Ruvi, the lovely husband and wife duo behind the walks in front of The Galle Face Hotel shortly after 3 pm  – the best time I’m told, to avoid the scorching midday heat and to experience the city in wind-down mode. Two safari jeeps were waiting for us. Despite having second choice in terms of vehicles – ours didn’t have a canvas cover – but that allowed us experience the cool evening sea breeze. While I couldn’t let my hair down because I don’t have any, the others sure did!

We were driven through the busy streets of Pettah, where we passed porters hurriedly carting their goods from trucks to shops. I assume some of them were carrying flour, judging by how powdered up their foreheads and bare backs looked in contrast to their skin.

Our first stop was at the Wolvendaal Church, one of the oldest churches in the island that stands just outside the Colombo Fort. The church was named Wolvendaal (Dale of Wolves) by the Dutch who mistook the jackals who ran free in the marshes of the Fort area in the 17C for wolves. I have been inside the Wolvendaal church on many occasions from weddings to baptisms which are still conducted at the church, but never did I appreciate the history behind it.

We were introduced to Arul, the church guide. Despite minor renovations that are underway inside the church, there are many things to see, from the gigantic pipe organ that is still in use to the well-preserved tombstones of former Dutch governers. The workmanship on the stones is impeccable with the inscriptions and pictures being carved out of the blocks giving an embossed effect. In each stone is carved both a skull and an hour glass. According to Arul, most of the Dutch during that period died either of malaria or yellow fever – the significance of the skull being to warn people of digging up the graves due to fear of the return of the disease , and the hourglass to signify that life is short.

After taking a last look at a number of priceless pictures of spooky looking colonials that are hung inside the church, we hopped back into our jeeps to get to the starting point of our walk. A short while later, Mark abruptly stopped the jeep and helped us off at what initially looked like a fire station owing to the two fire trucks parked under the arches.

Once we entered the doors however, it was a true treasure-trove of artifacts that dated to the beginning of Sri Lanka’s automotive age. After taking pictures, I ended up at the back of the group heading up the stairs. All I could hear were cries of excitement and and I couldn’t wait myself to see what all the fuss was about.  All I could see was a sea of Red Dotters peeping into what seemed to be a boardroom of people in deep discussion. Upon careful inspection I realized that it was, indeed, a meeting,  but one that commenced over a century ago, with lifelike effigies of the town councilors trapped in a moment in time.

We’d just walked a few steps from the building when we spotted a truckload of irresistible rambutans – one of a great variety of Sri Lankan tropical fruits. After filling up our bags and tummies we resumed our walk through the busy streets and passed the bell tower of the council that once was used as an announcement of a death sentence, and walked into what seemed to be a mini complex of small shops, which actually were the former horse stables of the governor.

We later visited the 17C Dutch House, the former residence of Count August Carl Van Ranzow, which is now a museum that exhibits antiquities of the era including a cannon from one of the ships, and a few original Almarahs (Dutch wardrobes)

We took to the streets once again, passing shops and stalls selling almost anything, from foods to hardware and clothing. We walked past the landmark Gafoor building which after over a century is beginning to show its true age, and the Grand Oriental Hotel, once known as ‘the most grand luxurious hotel in the East’. The hotel has been the residence of many famous personalities including Russian novelist Anton Chekov, who began writing Gusev there.

From the fourth floor is one the most spectacular panoramic views of the Colombo harbour. While we took in the view while sipping a cup of tea, I asked Mark what made him think up the Colombo City Walks.

“While driving through Pettah one day I realized that there were so many wonderful treasures hidden within, and as we had walked and seen these places ourselves we thought it’s a shame to leave all these places hidden,” he said. “That’s when we thought up a tourist walk.”

We later stopped off for cocktails at the oldest building in Colombo, the Dutch Hospital, which has been recently converted into an upmarket shopping and dining arcade. We chatted and had a few laughs while the sun set and watched as the lights of the beautiful World Trade Centre took over, changing the ambience of this chic addition to central Colombo.

We then made our way to the Colombo lighthouse, but not before passing the former prison cell of the last king of Sri Lanka, where he was held before being deported to India.

I had never visited the lighthouse before – it had been barricaded and guarded during the conflict – and the architecture and beauty was amazing. The lighthouse shining out to sea gave us sweeping views of the sea with the harbour on the right and Galle Face (our final destination) to the left.

Walking back along the busy Galle Face, buzzing with families having fun with their kids, to fitness fanatics on their daily jogs, we stopped off at a few food stalls to pick up some manyokka chips, slices of the Manihot yam sliced, deep fried and salted and a variety of achcharus (Sri Lankan pickles) including pineapple, guava, olive, and golden apple (ambarella). It was truly the perfect end to an eye-opening tour of just part of the city of Colombo.

Afro Jack to perform at Sunburn festival in Sri Lanka