Exploring the Secrets of the Galle Fort

In my many travels to Galle, I have admired the ancient Fort area and enjoyed the laid-back feel of the place and remnants of the colonial era. While I have read a lot of articles on the place and researched its history, The Galle Fort Walking tour revealed secrets that were hidden in plain sight! 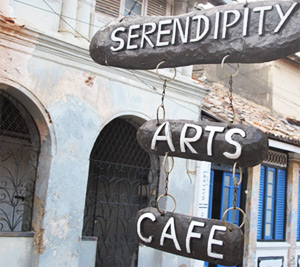 It was clear when we got to Sri Serendipity, the quirky café owned by our host Juliet Coombs, that we were in the right place. The Coombs family hail from a lineage of merchants who made their home inside the Galle Fort centuries ago and pictures and books telling of the Fort’s history adorned the walls. None of us had actually met Juliet; all we knew was that she was an international reporter who had fallen in love with Sri Lanka and, in the process, had also met the love of her life in the Fort. 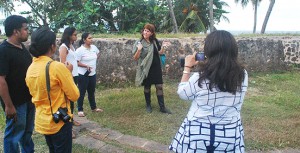 Soon after we arrived, a large group of tourists walked in led by a lady who was dressed in a black outfit complemented by a pair of long leather boots. She would later introduce herself as Juliet Coombs. After a brief introduction and placing our fresh-juice orders in advance, we were off. Juliet was attired in one of the most uncharacteristic outfits you’d expect for a walk in a tropical country, but she seemed quite comfortable. It was far from what we were feeling, panting and sweating just to keep up with her pace. 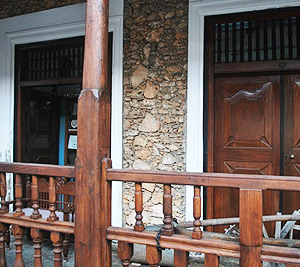 Juliet showed us that all the walls were entirely made up of fossil corrals and clay! Not only that, she’d later reveal that all the original houses inside the Fort were also made of the same, providing a strong structure that kept houses nice and cool. She also pointed to one of the boats close to the horizon and said that before the tsunami of 2004 hit the Southern coast, the waters receded that far out, revealing 26 shipwrecks – vestiges of the fort’s defences. We then were guided to a few of the ammunition stores which housed cannons, gunpowder and even shells. They might seem pretty ancient, but according to Juliet a few of them still house live ammunition and gunpowder, so a word of caution to all smokers. Taking a break from the fortress walls, we made our way through Church Road where the rich aromas of street foods filled the air and merged with the smells of burning incense sticks close to the mosque. Juliet told us that the mosque that sits on Church Road is believed to have been a church that was later converted into a mosque. I don’t doubt it as architecturally it doesn’t look like any mosque I have seen before. We later visited one of the many museums in the Galle Fort where we saw how semi-precious stones were still cut traditionally. And looked through some of the ancient crockery, and cooking utensils brought in during colonization. 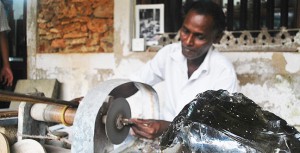 Before we ended our walk, Juliet stopped abruptly at what seemed to be an ordinary postbox. It turned out that this post box is a George V Royal Mail box, made out of one block of stone. The sturdy box weighed at least a ton and all our efforts to try and lift it were futile. After our long, yet thoroughly exciting walk, we headed back to Sri Serendipity where we asked questions and continued our discussion on the Fort over the drinks we had ordered earlier.

Visiting the Blues out in the Blue

The Hidden paths through the Knuckles