The Masked Men of Sri Lanka 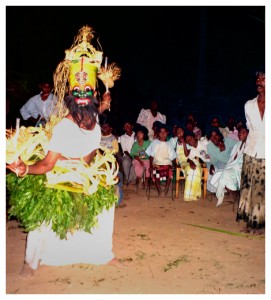 When the word ‘masked men’ comes up in conversation, it would most often be in relation to a Batman or Spiderman, or the many other masked super heroes from your favourite comics or movies. But what if I told you there is not only one, but many masked men in Sri Lanka who possess special powers of their own? Would you believe me?

While the masked men I’m speaking of don’t have the powers of your typical superheroes, to most Sri Lankan village folk who flock to be saved by them or to see them in action, their powers are very real.

The masked men are the devil dancers of Sri Lanka. These dancers aren’t wearing their masks to conceal their identity, but to turn into a new entity, and are often called upon by families who believe an illness in their family is caused by an evil spirit.

‘The Thovil’, the ceremony that is held as a result, can vary in size and involves from 5 to over 20 performers. In a typical ceremony, the ‘Maha Kola’ or chief demon, who wears a mask depicting all 18 forms of illness, leads the other masked figures, who each wear a mask depicting a certain demon responsible for the illness, to dance and perform rituals through the night.

The ritual, which is believed to be over 2,000 years old, lasts up to 12 hours and involves masked figures dancing and performing to the beat of the ‘Yak Bera’ or devil drums in a circle created by the village people. Listening to the screams of the dancers and watching them in their outlandish masks gave me shivers down my spine. 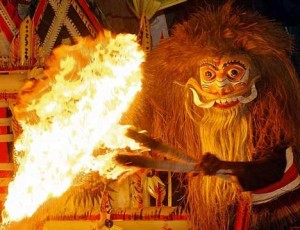 Amongst the fire breathing and rapidly-increasing tempo of the dances and rituals, the affected party in the family will begin to respond to the dances and become possessed, scream, and dance to the tune of the drums. The ‘Maha Kola’ then identifies which demon needs to be appeased, and makes the patient burn an offering to it.

Amazingly, the patient is quite often believed to recover following the process, and is saved by the masked men of Sri Lanka.

While the ceremony is rare to witness in its original form today, some hotels may still allow a glimpse of the activity in commercial form.