Protective jackets a must to visit Sigiriya summit 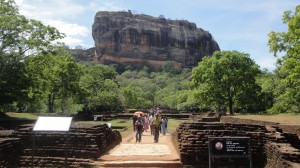 When you think of safety jackets, the first thing that comes to mind usually is an activity that has something to do with the sea. In this case however, safety jackets have been deemed a must in one of the driest regions in the country!

The Sigiriya Central Cultural Fund has made it essential for tourists to wear safety jackets if they wish to scale to the top of Sigiriya, one of Sri Lanka’s key landmarks and tourist attractions.

According to the manager of the fund, the decision was taken after two children and a tourist had been injured in a wasp attack recently. Following the attack, only foreign tourists were allowed to proceed beyond the Lion’s Paw.

The likelihood is that this will be only a temporary measure until the issue is dealt with. Wasp attacks have been an occasional menace in the past couple of years between April and September. This year has seen five severe incidents of wasp attacks – a much greater occurrence.

According to Mr. Ranaweera, working director of the Central Cultural Fund, among common factors such as human activity and strong winds, the intense heat during existing drought conditions could have aggravated the situation.

So don’t worry if you end up looking like a character from a sci-fi movie when you don the protective jackets, be glad you won’t look like an alien underneath!