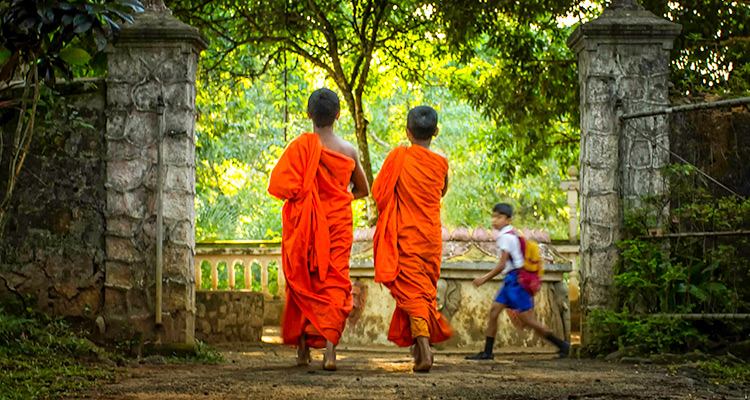 There are several religions interwoven into Sri Lanka’s rich tapestry, but Buddhism is the belief system that lies at the core of the island’s complex culture. This philosophy swept across Asia more than 2,000 years ago and since then has influenced many elements of the Sri Lankan way of life.

With hundreds of temples dotted throughout the country, tended by monks dressed in eye-catching saffron robes, you cannot help but notice the presence of Buddhism when you visit Sri Lanka. In addition to the unmissable architecture paying homage to Lord Buddha, the peace, hospitality, and selflessness at the heart of Buddhist teaching permeates every corner of the island.

Discover the details of Sri Lankan Buddhism by adding special experiences to your Sri Lanka holiday itinerary. As well as taking tours of the most iconic ancient historical sites, either on foot or by bike, consider a more unique exploration of Buddhism through sacred mountain treks and watching mesmerizing traditional festivals. Whatever your beliefs, these exceptional Buddhist experiences in Sri Lanka are sure to get your spirits soaring and deliver special memories that will last a lifetime.

Anuradhapura Citadel was the first city to be built in Sri Lanka and for many years was the centre of the island’s civilisation. A complex of monasteries, temples, royal buildings, and bathing pools dating back to 4th century BC, a visit to Anuradhapura is the perfect first stop when exploring Buddhism in Sri Lanka. A highlight of this experience is the sacred ancient Bo tree said to be grown from a branch of the tree under which Lord Buddha sat and gained enlightenment.

Equally ancient and astonishing is 2,000-year-old Dambulla Cave Temple. Once a refuge for an ousted Sinhala king who repaid the monks who sheltered him by funding the creation of this temple complex, Dambulla Caves house over 100 exquisite statues of Lord Buddha and are decorated with a series of storytelling murals painted on the ceiling and walls. This has been a sacred Buddhist pilgrimage site for 22 centuries and promises to take your breath away.

Centred around a relic that has been protected in Sri Lanka since the 4th century AD, residing in Kandy’s Dalada Maligawa (Temple of the Tooth) for the last 500 years, the Kandy Esala Perahera is a grand ten-day festival which takes place in August each year. As the temple name suggests, the sacred relic is an ancient tooth thought to have belonged to Lord Buddha. The tooth is usually kept enshrined in a golden casket within the temple, but during the festival it is paraded through the city streets on the back of an elephant along with a guard of honour made up of fire breathers, Kandyan dancers, and more elephants dressed in traditional finery. This is an extraordinary celebration to behold which annually draws Buddhists from around the world.

Vesak is a festival of lights which takes place each year in the various predominantly Buddhist countries in Asia. During the May full moon, Sri Lanka is illuminated by lights, lanterns, candles, and fantastic visual displays that cannot help but entrance the eye. The best place to experience Vesak in Sri Lanka is in the capital, Colombo, where you can walk glowing streets and stop off for complimentary refreshments from the various community-run stalls set up throughout the city.

Off The Beaten Track

One of Sri Lanka’s lesser-visited heritage sites, Mihintale is hugely important to local Buddhists. Mihintale is comprised of a hill topped by an enormous white Buddha statue with ancient monastic buildings encircling the base, best explored at dawn or dusk. Climb the steps to the summit and soak in the serene atmosphere which pervades this special historical site.

Sri Lanka’s sacred mountain. Between December and March, tourists can join pilgrims on a night-time hike up Adam’s Peak, one of the tallest mountains in Sri Lanka’s hill country which is topped by the imprint of a footprint said to be that of Lord Buddha – although locals of different faith variously claim it for people key to their own religion. Climb the lamp-lit staircase up to the very top of the mountain while listening to the chatter and chanting of your fellow hikers in time to be rewarded with one of the most breath-taking sunrise scenes in Asia and the chance to see the footprint shrine.