As something of an adopted Sri Lankan myself, I felt obliged to journey south to Galle from Colombo to join the great pilgrimage to Muttiah ‘Murali’ Muralitharan – the Tamil man who has been hero to the island’s cricket cult for the past 18 years. Following the announcement of Murali’s impending retirement from Test cricket after the match, the Galle International Stadium and surrounding Dutch Fort was dressed up as the chosen shrine, littered with celebratory billboards and flags, and the old rivals – India, identified as the sacrificial offering. 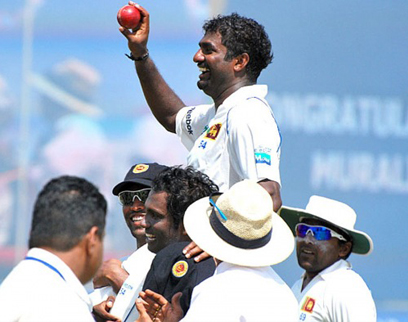 Tailing the procession to the south coast and only to arrive in the nick of time was none other than President Mahinda Rajapaksa himself. The arrival of His Excellency’s helicopter fleet bearing down on Galle Fort on the final morning ended up as more of a distraction than a grand welcome. By this stage with 799 Test scalps in the bag, the spin magician from Kandy was on the very brink of a superhuman cricket landmark…

Thanks to Sri Lanka winning an important toss and batting through on day 1, and with the heavens opening on day 2, Murali finally took to the pitch on day 3, but with pads on and bat in hand. Respectfully greeted by an Indian guard of honour and seemingly endless fireworks, Murali characteristically flogged his way to 5 not out. Privately, he was in a hurry. Sri Lanka had plenty of runs on the board and by the end of the afternoon session the protagonist of the piece was yet to bowl in the match he entered in to with 792 career Test wickets to his name. The faith in the man’s ability is such that T-shirts branded with ‘Murali 800’ were already selling on the boundary.  The big question and the excitement it entailed loomed large. Will he pull off the comic book ending? In the fading light of that especially Asian evening haze, Muralitharan trapped Sachin – India’s very own great – lbw to cries from the ramparts and we all began to believe.

Murali’s first innings, career 67th, five wicket haul saw Sri Lanka enforce the Indians to follow on. Coming into the final day Sri Lanka needed 5 wickets – yes, but Murali needed two. I wandered down through the enchanting, time-warped streets of Galle’s Fort, exited the main gate and circled a ground that was humming. The clouds were mere wisps and I had to squint my eyes for the bright morning sun and vibrant colours of this cricket festival. The local brass band in the crowd didn’t want to stop, and nor did Murali.

It didn’t take him long to snare his seventh of the match, and with this we climbed up to the roof of the pavilion to survey history. Standing next to the TV crew filming straight down the wicket, I thought of all the Sri Lankans throughout the island putting everything down and tuning in to witness the moment for their most revered son. I imagine Sri Lanka wasn’t at its most productive that Thursday, and I ended up very sunburnt as we were left to desperately hold our breath! Murali bowled the whole session out without further success, and came back straight after lunch. This man’s cricket-worn body that has already convinced its cricket-possessed mind to retire became visibly sapped of adrenaline and was now running on empty. His struggles only served to enhance the magnitude of the landmark: there is nothing easy about taking Test match wickets. India were slowly sinking with nine men already fallen and only the very dregs of their batting line-up remained. It had to be Murali. Wide-eyed, he propelled an off-spinner that ripped away from the prodding bat to catch the edge and carry to Jayawardene’s grasp at first slip. Cue pandemonium. Murali was carried off the pitch on his team’s shoulders, triumphantly holding the ball aloft and sporting a grin shared by all that watched. The replay screen broadcast no images, but for one word – Legend.